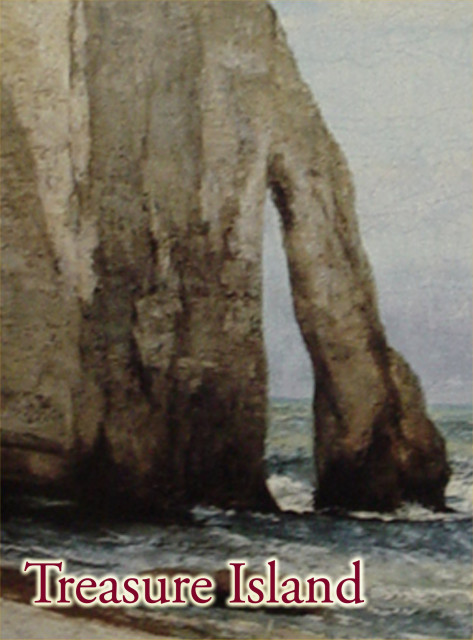 Treasure Island is perhaps Robert Louis Stevenson's most famous novel. Its beginnings were simple. While on holiday, Stevenson and his stepson, Lloyd Osbourne, devised an imaginary map. Stevenson's friend, William Henley, created the character of Long John Silver. Treasure Island was written in Scotland in 1881, and first published in 1883. Stevenson also wrote The Strange Case of Dr. Jeckyll and Mr. Hyde. (See also the Robert Louis Stevenson biography link below.)

As a child, Stevenson often dreamed of escaping from his Victorian world, from responsibility in general. Even though Treasure Island is considered a children's book, its appeal reaches us all. It touches our sense of adventure, fantasy and desire to escape from our duties, public and private, even if only for a moment.

The novel takes place in the eighteenth century. It is a tale of adventure in a world filled with pirates and characters with names like Billy Bones, Black Dog, Long John Silver, Ben Gunn, Pew, Israel Hands. It is a story of trickery, recklessness, violence, greed and desire.

Treasure Island is also the story of one boy's coming of age. Jim Hawkins, the protagonist, narrates almost the entire novel. The narrative begins after the adventure is already completed, so we know from the first paragraph that Jim, Squire Trelawney, Smollett, and Livesey have survived and triumphed. Jim paints a portrait of his own heroism that lacks the sensationalism and glamour to which we are so accustomed in today's portraits of our own super-heroes. He tells his tale modestly. By the novel's end, Jim Hawkins has undergone a significant transformation