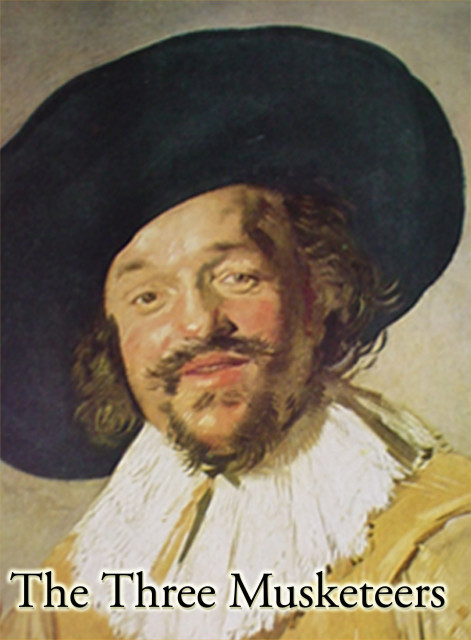 The Three Musketeers by Alexandre Dumas from Decklin's Domain audiobooks.

The Three Musketeers caused quite a sensation when it was published in 1844 in a Parisian magazine entitled Siecle, and it remains popular and influential to this day. Dumas combined the genres of the historical novel and prose romance into a single story. Prior to Dumas, works of historical fiction were slowly paced and presented a history that seemed overworked.

In The Three Musketeers, Dumas uses modern, conversational prose and makes his story more important than the history surrounding it. The period he writes about is seventeenth century France. But this only provides a backdrop to the fantastical world he creates in front of it. The Three Musketeers is a prose romance of history. According to M.H. Abrams, the genre prose romance usually lines up characters that are sharply discriminated as heroes or villains, masters or victims. Its protagonist is often solitary and relatively isolated from a social context. The novel tends to be set in the historical past. The tone and atmosphere suspend the reader's expectations of the present, so the reader no longer expects anything having to do with everyday experiences.

D'Artagnan, the central character of the novel, is a young, impoverished Gascon nobleman who comes to make his fortune in Paris. All he has with him is an old horse; a letter of recommendation from his father to the head of the King's Musketeers; and a recipe for a miracle salve that heals wounds. Even though he loses the letter and sells the horse, he is permitted to enter, but he must wait an extremely long time to join in full. He keeps himself busy by insulting three of the musketeers. They challenge him to duels the next day. He shows up wearing great courage, but is warned of a law against dueling. The musketeers and D'Artagnan join together and easily defeat the agitators. D'Artagnan is accepted into the ranks of Athos, Porthos and Aramis and they become inseparable friends. The story follows the four friends' heroism. They act valiantly at every opportunity. Along the way, Dumas focuses on the petty affairs of the story line. As a result, the telling of the great events are more entertaining and satisfying than any direct explanation could accomplish.

While all of this is going on we, the reader, await the answer to the all-important question of whether or not D'Artagnan will become a true musketeer.